Dave Hopkins and George Kosty - San Soo Of Jimmy H. Woo $24.00
Back to products
Next product

Bas Rutten – Punk Payback Season 1 DVD 7. Multiple Socks is digital courses, ebook, digital audio and DVD… not physical product. We will sent a download link lifetime to your email order. Or you can update your courses at “My Downloads“ 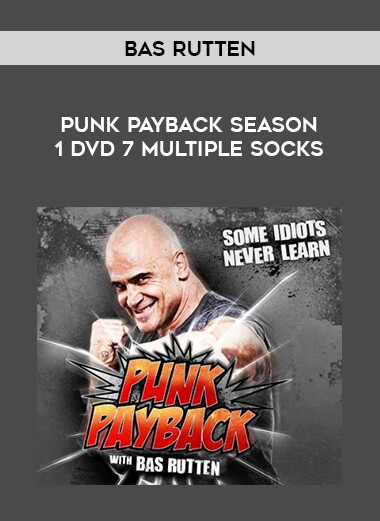 (From the guy who suggested throwing hot sauce in an assailant’s eyes )UFC heavyweight champ and 3x King of Pancrase, Bas Rutten, has surveyed hundreds of hours of footage and found the best examples of punks who have gotten away with their crimes.Along with the hottest stars of MMA, motocross, and skateboarding, Bas will reenact each scenario, demonstrating the necessary combat moves one would need to survive on the streets.Watch out punks; it’s time for the little guy to take charge in Punk Payback.
DVD 7. Multiple SocksBas Rutten lays down amazing moves for multiple assailants, turns the tables on a lottery-ticket thief, and Bas introduces a cane-bearing gentleman, who isn’t afraid to rumble.22min.