Scanning & Sorting with MoneyStream by Peter Worden $25.00
Back to products
Next product

Butterfly Guard Re-Discovered 4 DVD Set by Adam Wardzinski is digital courses, ebook, digital audio and DVD… not physical product. We will sent a download link lifetime to your email order. Or you can update your courses at “My Downloads“ 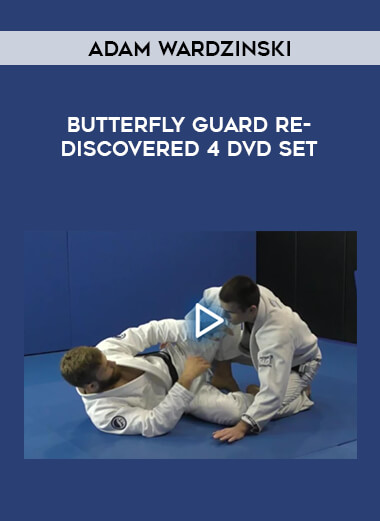 Learn The Self Taught Secrets That Have Allowed Adam Wardzinski To
Become The Best Butterfly Guard Player On The Planet – While Training In
Poland!

In The Past Year Adam Has Beaten World Champions like Erberth
Santos, Muhammed Aly, Isaque Bahniese and ADCC Champ Vinny Magalhaes
With His Butterfly Attacks.

Adam Wardzinski doesn’t come from Brazil or the US like almost
every elite BJJ athlete on the planet.  He comes from a city you’ve
probably never heard of: Poznan, in Poland.

There are no world champions there, it is a normal looking place –
not ornate like New York or Paris.  Just a quiet European city.  But…
there is a guy there who is using the Butterfly Guard to KILL everyone –
at the highest levels.  When you think about it, it is pretty
remarkable that someone from a place so out of the way could get so
good.  What is even crazier is that he mostly taught himself…  If he
could get this good, couldn’t anyone?

Butterfly guard remains as one of the most effective, explosive,
and efficient positions in the world for those who know how to unlock
its potential. It’s a perfect way to manage the pressure and weight of
someone bigger and it doesn’t take any special skill or attribute like
height or flexibility to do, making it a great choice against a wide
variety of opponents. The problem is then… how do you sweep or submit
from there?   That’s where Adam Wardzinski comes in. As one of Europe’s
top black belts, he has spent years mastering this position.

-Join Adam as he takes you from the most basic butterfly
fundamentals, through to killer sweeps and submissions that are
guaranteed to impress. Learn how to attack all directions with the sweep
(while threatening the submission), and see what reactions Adam is
creating as he keeps his opponent’s base shifting like quicksand. Every
post or readjustment from your partner will just lead them closer to the
next attack in your arsenal after you have mastered this instructional!

-Once Adam has taken you through the basics of sweeping from the
butterfly, he starts to get really fancy. Find new entries and grips you
can attack from, and learn the precise way that Adam finishes his
sweeps and why! You won’t believe it’s as effective as it is! Once
you’ve mastered how to keep their base shifting, you’ll learn how to
pull them in any direction, creating a formula for unstoppable sweeps.

-Enter the lazy butterfly guard at your own peril! While a good
butterfly guard requires a control of space and distance, the lazy
butterfly guard instead takes aim at using an opponent’s posts and base
to create opportunities to attack. This aggressive and tricky approach
to open guard is built on the same principles as a more traditional
butterfly, leaving you free to move and flow.

Chain Your Guards Together For Even More Success!

-No guard by itself can work on every problem, but when you are
able to connect your attacks together through different positions, you
can become a sweeping machine. After his comprehensive technical
instruction on how to approach butterfly guard, Adam applies that same
methodical perspective to the single leg X. Find out how you can
incorporate this into your other attacks, how to sweep them every time,
and even some of the trickiest submissions you’ll see this year!

-Easily one of the best parts of this series is Adam’s perspective
on the sweep; once he has you controlled, he lets you react and decide
how he’ll end up on top. If you post one way, he’ll hook and sweep you
out. If you post, he’ll just switch his hips and bring you gently back
the other way. Once you pressure in, he drops underneath you, and when
you pull back, he’ll trap your leg in a single leg X. After watching
this, you’ll never be left without an go to move from your back again.

-Plus much, much more…

You too can unlock one of the sharpest and most effective guards in
modern grappling, with this exclusive 4 part video series from Adam
Wardzinski. He’s traveled around the world and back, perfecting and
rediscovering the modern butterfly, and he’s here to share it with you!
With sweep after sweep, submission after submission, and much, much
more, this is a can’t miss piece of jiu-jitsu knowledge that has to be
seen to be appreciated!