Diabetic Medications Part 1 from Laurie Klipfel $15.00
Back to products
Next product

Caio Terra – Modern Jiu-jitsu DVD 3 Butterfly Guard / Standing Passes / Takedowns is digital courses, ebook, digital audio and DVD… not physical product. We will sent a download link lifetime to your email order. Or you can update your courses at “My Downloads“ 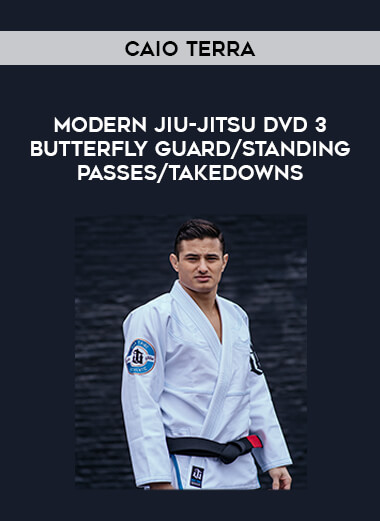 This is Caio Terra’s “Modern Jiu-Jitsu”. The complete DVD set is a comprehensive, level one, training program for beginners and intermediate Jiu-Jitsu practitioners. The series features over 140 techniques in 5 hours of video. The positions covered include: The Closed Guard, Mount, Turtle, Back, Butterfly Guard, Butterfly Passes, Side Control, Knee on Belly, Half Guard, North/South, Standing Passes and Takedowns. You will learn how to control, attack, submit, escape, sweep, pass and counter attack.

Caio teaches his unique approach to Brazilian Jiu-Jitsu, revealing details and secrets that make his style so effective. Each position in the series is in a sequence so one technique flows into the next. This linking of techniques, will help you understand that one movement leads to many options.

Caio believes that one must master the beginning levels without developing bad habits to be able to move on to the more advanced levels successfully. It’s hard to argue with someone who received his black belt in three years and then went on to win the World Jiu-Jitsu Championship, Pan American Championship and World No-Gi Championship all at the black belt level!