Strategy Rules: Five Timeless Lessons by David B. Yoffie Michael A. Cusumano $10.00
Back to products
Next product

Chael Sonnen – The Voice of Reason A VIP Pass to Enlightenment is digital courses, ebook, digital audio and DVD… not physical product. We will sent a download link lifetime to your email order. Or you can update your courses at “My Downloads“ 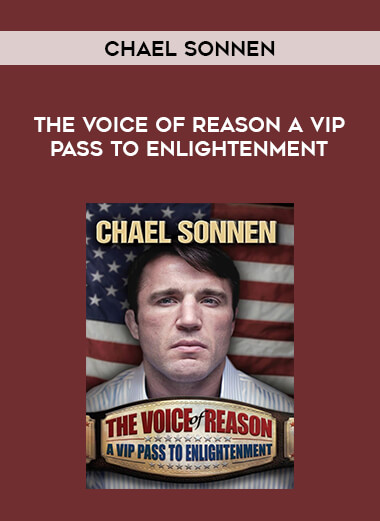 Salepage: Chael Sonnen – The Voice of Reason A VIP Pass to Enlightenment

The book that you are considering buying is nothing short of a VIP Pass to Enlightenment, written by the UFC’s most infamous and feared destroyer of men—Chael P.Sonnen.
Backwoodsmen and unlearned folk call him the Walking Thesaurus.
His contemporaries have bestowed upon him the title Sir Sonnen.
And those dwelling in the forgotten, forlorn jungles south of the equator reverently refer to him as filho da puta, a term Sonnen personally deciphered using his mastery of linguistics.
It means, simply, “the Great and Humble Bearer of Knowledge.
” In the coming pages, Sonnen’s commentary and tales of heroic adventure will initiate you into the world of superhuman greatness.
Allow him to carry you like a frail damsel through the world of professional mixed martial arts as he cuts weight, deals with moronic cornermen, expresses his disdain for focus mitts and punching in general, gets his face rearranged, and finds support and encouragement from fans.
Permit him to cleanse your mind’s palate and teach you the truth about history, politics, endangered species, cinema, terrorists, music, particle accelerators, and his plans for creating a Chaelocracy, which translates as “a Better Earth.
” Shower him with praise as he takes you into his manly mitts like a lump of clay and reshapes you in his own likeness.
Like all men of myth and legend, Sonnen strives for the betterment of the human race.
Prometheus brought us fire; Dana White brought us the modern-day gladiator; and Chael P.
Sonnen now brings us the step-by-step guide to being a great human being and patriot.
Purchase this book; learn how the world really works from the perspective of a man who has been face-to-face with presidents, wardens, dignitaries, judges, kings and queens, and athletic commissions; and find out if you have what it takes to awaken from your progressive nightmare.
There is no better day to stop being you and start trying to be Chael P.
Sonnen.
The time has come for The Voice of Reason.
Chael Sonnen is the best trash-talker in all of sports.
—Jim Rome Host of The Jim Rome Show I’ve never seen anything like it.
He’s the best thing since Muhammad Ali —Dana White UFC PresidentPS.
There no money laundring schemes in this bookPPS.
you won’t learn how to deal with triangle choke after reading this manual.