Fire It Up Series by Tara Stiles $25.00
Back to products
Next product

The Art of Japanese Penis Honoring by Hegre Art $29.90

Chinese Wushu Exhibition Project – Rules of Chinese Wushu Tuishou Competition Vol.7 is digital courses, ebook, digital audio and DVD… not physical product. We will sent a download link lifetime to your email order. Or you can update your courses at “My Downloads“ 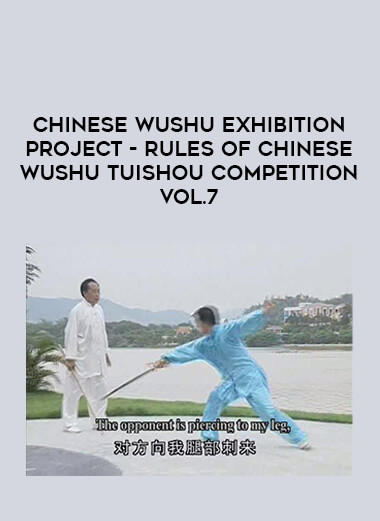 Traditional Shan Xi style Xing Yi Quan Series DVD/DVDsThere are three main styles of Xing Yi Quan being practised today – the Henan style, the Hebei style, and the Shan Xi style.
The Shan Xi style has been recognized as the original style and one which keeps its vigorous and powerful energy releases inside its movements.
This series is part of the Chinese Wushu Exhibition Project Series DVDs, demonstrated and explained by Zhang Zigui, one of the top 100 Martial Arts Masters in present China.
The famous martial artist Wu Shi Jun presents the demonstration.

7.Rules of Chinese Wushu Tuishou Competition (SXYD08) – 54 min.
On the base of Taiji Tuishou, Wushu Tuishou is a kind of civilized athleticisms, in which the competitors make efforts to have the opponent fall down to the ground due to loss of balance.
On the principles of Touch, Join, Stick, Follow, and “no hit with separated hand,” t he competitors utilize the hand techniques, such as Lv (roll back), Ji (squeeze), An (press), Cuo (scrub), Dai (lead), and the leg techniques, such as Bie (clip), Gou (hook), Ban (Stumble), Gua (hang).
Thus, Wushu Tuishou is also called civilized Sanshou (free fighting).
The rules for the competition shown on this disk are explained by Zhang Zigui, one of the prominent martial artists, and demonstrated by Wu Shijun and Liu Jun.
Wu is a famous Chinese martial artist, and Liu is one of the champions of China Wushu Championships.
This disk provides the competitors and judges of Tuishou with an excellent learning material which gives a detail account of allowed techniques, prohibited parts, and scoring criteria of the competition.