Emeric Arus - Biomechanics of Human Motion: Applications in the Martial Arts $29.00
Back to products
Next product

Into The Wormhole with Keenan Cornelius Episode 12 - Dogzapper $19.00

Cliff Derdeyn – Aikido Falling Tips Vol.3 Aikido Augmented Directional Rolling is digital courses, ebook, digital audio and DVD… not physical product. We will sent a download link lifetime to your email order. Or you can update your courses at “My Downloads“ 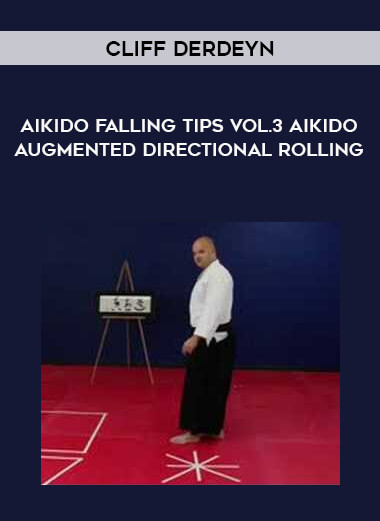 16 Volume Aikido has countless falling techniques for any method of martial arts self defense someone might need to call upon.
Learn many of these tips from an Aikido expert in thisvideo clip series.
Series Summary Aikido, the modern Japanese martial art, was developed between the 1920s and 1960s and emphasizes the spiritual and philosophical development of its students.
This development of spirituality and philosophical belief is directly derived from Shinto and Buddhism.
The name “aikido” comes directly from three Japanese characters that stand for “matching,” “spirit,” and “way.
” Aikido is meant to distract or immobilize, not kill or permanently damage the attacker.
Aikido fighters are thus demonstrating an effective but merciful response.
Ueshiba (the Great Teacher of Aikido) declared “To control aggression without inflicting injury is the Art of Peace.
” In this series of videos, see an expert demonstrate aikido moves, strikes, throws, locks, and drops.
Practice with our expert as he shows you how to do proper falls.
Take it a step further and learn aside and backward fall.
Then, challenge yourself and learn more about other self defense falls.
This expert is a black belt in Aikido and will not lead you astray.
You’ll learn many self defense tips for practical everyday situations.
Vol.3 Aikido Augmented Directional Rolling