The Prince Naseem Hamed Career Set - Disk 2 - Various $49.00
Back to products
Next product

Daniel Sullivan – Dirty Boxing (Filipino Panantukan) Vol 3 is digital courses, ebook, digital audio and DVD… not physical product. We will sent a download link lifetime to your email order. Or you can update your courses at “My Downloads“ 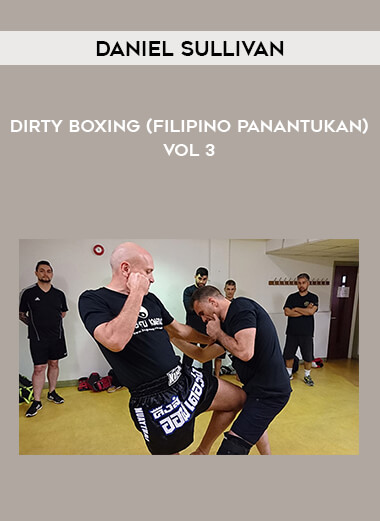 Daniel Sullivan’s Dirty Boxing (Filipino Panantukan) Volume 3[AVI-Video, PDF-Ebook]There is 1 more volume after this in this series…The name Dirty boxing misleads a little.
I was expecting old style western boxing with lots of illegal shots much like mark hatmaker’s illegal boxing.
That’s why I added Filipino Panantukan in the title of this torrent.
The content here is FMA.
If you like striking aspects of MA then FMA pretty much rules with drills.
Review Found during googling about this set.
Quote:I got this a couple of weeks ago and I’ve just finished watching it (it’s nearly 5 hours on 4 DVDs), so I thought I’d write a review.
The set is primarily a collection of Panantukan pad drills, it’s pretty much all focus mitt work, and you will need a grasp of basic boxing technique to use this set.
It deals with the kickboxing phase almost exclusively, there are some drills which go to the ground and do ground punching, but by and large the Dumog is used to change angle or level to facilitate striking.
Personally I’d have liked to see some more attached striking work (just because that’s what I like ) but I can understand why they went this route with what they were trying to achieve.
The drills have that Inosanto JKD flavour, they’re pretty much all entry-set up-flurry-finish, and the delivery is always instruction-review-live demo.
The technique drills are interspersed with “blitz” drills, high volume punching drills which just have demonstration with instructions called out.
Content wise it’s what you’d probably expect from what I’ve already said.
Kickboxing combinations mixed with knees, elbows and headbutts, Waslik, Gunting and Siko entries, Dumog entries and footsweeps, and a collection of finger jabs, claws and rips, footstomps and groin shots.
Production quality is high, Sullivan’s delivery is clear and engaging, and his students are clearly skilled with nice clean technique.
In the first couple of disks there is a definite Muay Thai flavour to some of Sullivan’s movements, but that seems to wear off by the later disks.
The disks also have a .
pdf syllabus, which is a nice touch.
I really enjoyed this set, and found it very informative.
The drills were ALL useful, no filler or dubious techniques, and the sheer volume of quality information is staggering.
There are enough drills here to teach a class for a good 2 years If you’re watching the whole set then the fact that the drills are all structured the same can make it a little samey, but it didn’t detract to such a degree that I lost interest.
I’d say the only thing I was disappointed with was the attached striking aspect, but then I suppose this is a problem with any FMA set.
The individual skillsets are all supposed to be combined and there’s just such a vast amount of stuff.
You probably need DVDs on Panantukan, Sikaran, Dumog, Hubud and Kino Mutai, and THEN an advanced set on combining them.
Who should get this set? Obviously anyone who does FMA empty hand work (like I say, the array of drills is astonishing), anyone who does a kickboxing system and wants to learn more combative type material, or anyone who does a TMA striking system who wants to explore more functional training methodologies.
I’d say anyone who was interested in learning this material who doesn’t have a background in standup would need to get a boxing basics DVD or Rick Faye’s Panantukan set as well (or go to a boxing class).
I would certainly give this DVD set 5 stars and recommend it to anyone who’s interested.