Mark Cunningham – The 50 Shades Effect $59.00
Back to products
Next product

Diallo Frazier – Ghetto Blocks – Ghetto Boxing is digital courses, ebook, digital audio and DVD… not physical product. We will sent a download link lifetime to your email order. Or you can update your courses at “My Downloads“ 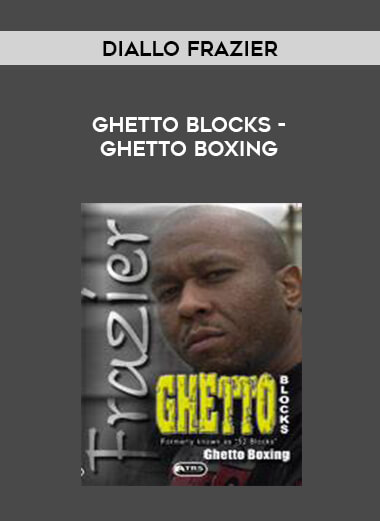 Diallo Frazier was among the nation’s most elite gang “enforcers” for all of his adult life. He wound up in that dangerous position because after growing up in the violence of the Chicago ghettos, he learned to be better than everyone else at fighting.

Diallo Frazier’s job including debt collection, enforcing the rules and doing anything that needed to be done to protect and keep the gang strong.

Diallo Frazier got so good at fighting because he was clued in to a highly secretive street fighting system tightly guarded by the elite street gangs in the U.S.

Diallo Frazier learned and mastered street fighting early on, and it allowed him to become a top enforcer. We are calling this system Ghetto Blocks (the real name can’t be revealed because the gangs that protect it made it clear that would not fly and someone would pay). If you would like to learn this devastating system make sure you order the Ghetto Blocks DVD package. The great thing about it is that anyone can learn this style of fighting, no formal training is needed. Diallo Frazier makes it easy to learn, you will not be disappointed!
Known here as Ghetto Blocks… this system, born out of the most violent prison scenarios, Is regarded for being highly effective in defending yourself against ANY attacker, multiple attackers, even armed attackers anywhere, any time.

Vol.3.Improvised WeaponsIn this video, you will discover how to use improvised weapons such as pocket change, a belt, car keys, and a car antenna to defend yourself in an attack.

Vol.4.Putting it all toghetherIn this final video, Diallo puts all that you’ve learned together.
He’ll demonstrate “Playing Bodies”, “Slap Boxing”, how to act after being grabbed or hit, and more.