Empty Mind Films – Chen Village is digital courses, ebook, digital audio and DVD… not physical product. We will sent a download link lifetime to your email order. Or you can update your courses at “My Downloads“ 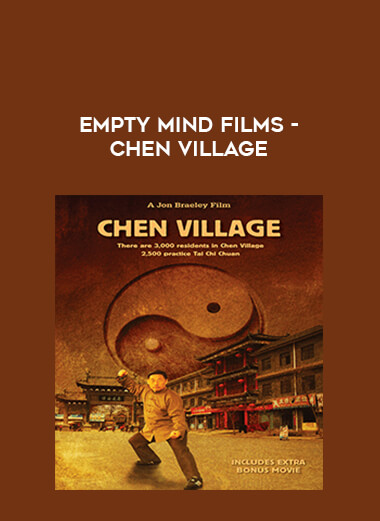 2500 practice Tai Chi Chuan(Includes Extra Bonus Movie) In China it is known simply as Taiji village.
When you first arrive you are struck by how unremarkable it is.
Yet as the birthplace of Tai Chi Chuan and the Chen family, it is very significant.
As our journey unfolds in Chen Village where 2,500 of the 3,000 residents practice Tai Chi, you will realize how remarkable it really is.
Chen village, set in the remote countryside of central Henan, appears to offer little.
Like most of rural China, Chen village suffered badly during the cultural revolution and even today, it is a poor village populated mostly by farmworkers.
Yet as the birthplace of Tai Chi Chuan it is one of the most significant locations in Martial Arts.
The Chen family, standard bearers of the Chen style for four hundred years, continue to teach Tai Chi Chuan at the Tai chi school in the center of the village.
The Chen style was at an all time low until fairly recently and although eighty percent of the village uphold its practice, outside China, this original style was little known.
This is an intimate journey to Chen village to discover how the present generations of the family and especially its patriarch Chen Xiaowang, have rescued the Chen style from obscurity and why every year hundreds of Tai chi students from all over the world make the long pilgrimage to this small village in rural China.
Hear the stories unfold of life living and training in the village from the foreign students and although they are not expected to farm or work in the fields, they are expected to live like a martial artist would in rural China … very hard and tough! Featuring Chen Xioawang, Chen Xiaoxing, Chen Bing, Chen Ziqiang and many more.
Runtime is 80 minutes with 15 minutes of feature bonus footage of the Chen masters.
Directed by Jon Braeley and assisted by Betty Yuan.
Soundtrack by Vi An and other artists.
As our journey unfolds, you will realize just how remarkable Chen village and its people really are.
Features the following: Chen Xiaowang – Chen Xiaoxing – Chen Ziqiang – Chen Bing and many more.
Chen Xiaowang is the standard bearer and 19th generation lineage holder of Chen style Taijiquan.
His grandfather was the famous Taijiquan grandmaster Chen Fake.
Chen Xiaowang began his study of Chen style Taijiquan at the age of seven under his father, Chen Zhaoxu, and later with his uncles Chen Zhaopi and Chen Zhaokui.
Recognized as one of four “Buddha’s Warrior Attendants,” the four outstanding exponents of the 19th generation in Chen village or Chenjiagou.
Today, Chen Xiaowang spends most his time outside China, teaching at Chen style seminars and training camps all over the world.
Chen Xiaoxing, the younger brother prefers to stay in Chen village and runs the Tai chi school.
He famously stated – “I really have no need to leave Chenjiagou.
Everything I need is here.
” His commitment to remain in a rural environment is both practical and spiritual.
Chenjiagou’s physical isolation provides an increasingly rare environment for undiluted, non-commercialized martial training.
The village attracts outsiders from within China and the globe seeking a focused training experience that has remained largely unchanged for almost 400 hundred years.
UPC: 753182164465Language: English (Subtitles)Run Time: 80 Minutes Format: 16:9 Widescreen Standard DVD
Audio: 5.1 Dolby Surround Sound Region: Worldwide