Understanding Credit Derivates & Related Instruments by Antulio Bomfim $19.00
Back to products
Next product

Frank Shamrock Advanced Submissions – Vol 1-4 is digital courses, ebook, digital audio and DVD… not physical product. We will sent a download link lifetime to your email order. Or you can update your courses at “My Downloads“ 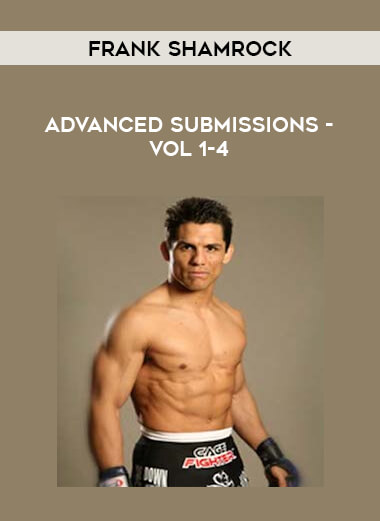 Frank Shamrock is a superstar in the mixed martial arts arena. His
dominance over the years has inspired many martial artists to train in a
wide variety of fighting styles. His most recent accomplishment has
been to establish a new fight game called, ?Shootbox.? Its unique
fighting arena along with innovative rules has brought fight sports
entertainment to a new and exciting level. Shamrock is the current WEC
Light Heavyweight world and was undefeated as a UFC World Champion. He
is a two time Hall Of Fame Inductee and holds the Guinness Book of World
Records for ?fastest championship victory in full contact fighting.?Frank Shamrock – Advanced Submissions Vol. #1: GUARANTEED SUBMISSION COMBINATIONSFlowing
combinations for attack, side mount arm attacks, rolling the body with
hips for straight arm bar, rolling knee bar, toe-hold and heel hook,
crooked neck head scissors, shoulder lock, turning straight arm bar,
inside heel hold and more.Frank Shamrock – Advanced Submissions Vol. #2: GIVE UP YOUR BACK & WINRemain
active and always try to stand up, monkey roll, stand up, sit out, no
hooks or figure four, lifting the chin, back turned shoulder lock,
straight arm, gramby roll, head butt, catching the leg, pyramid, pull
over the head, sidekick, back kick, back fist and more.Frank Shamrock – Advanced Submissions Vol. #3: ADVANCED CONTROL AND SUBMISSIONThe
active guard; open and close, swimming the legs in and out, hips
sideways, sweeps with hips, with knees, push the head, sit ups,
crucifix, guard passed roll, walking up the guard with the knees, turn
arm bar, leg choke, turn, mount, half guard escape and hold.Frank Shamrock – Advanced Submissions Vol. #4: SUBMISSION FIGHTING TRAINING GAMESThe
Turtle game; control the weight, on top or on bottom, Choke game; back
to the mat, Leg game; first two on one, split the feet, sit on legs, sit
up, Dog game; stay on the back, Submission games; move for move.
(EXCELLENT FOR ADULT CURRICULUMS)

$39.00
Compare
Add to wishlist
Start typing to see products you are looking for.