Zilio & Cattaneo - Judo Atemi $15.00
Back to products
Next product

Stop Trying to Fix Yourself by Deborah Eden Tull $87.00

Kai Greene The Return 2016 1080p is digital courses, ebook, digital audio and DVD… not physical product. We will sent a download link lifetime to your email order. Or you can update your courses at “My Downloads“ 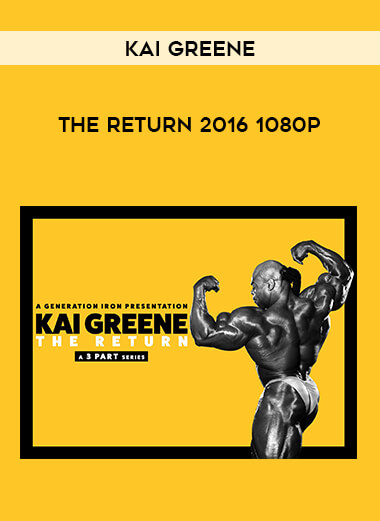 Kai Greene is one of bodybuilding’s top athletes, labeled by the fans as – “The People’s Champ.”

After placing 2nd at the biggest bodybuilding competition in the world,
Mr. Olympia, for 3 years in a row; a shocking announcement was made…
Kai Greene would not compete at the 2015 Mr. Olympia. Dividing the fans,
athletes, and judges alike.

Now witness his challenging and triumphant return, in this 3-part series
event. Follow Kai’s every step from the gym to the stage as he prepares
for the Arnold Classic bodybuilding competition. Watch Kai make
bodybuilding exciting again         A documentary in 3 parts Part 1: The Decision 16:17