Felix Valencia - Lameco Knife Fighting $19.00
Back to products
Next product

Building the Gymnastic Body - The Science of Gymnastics Strength Training $26.00

Mike Fowler-NoGi Made Easy Disc’s 1-4 is digital courses, ebook, digital audio and DVD… not physical product. We will sent a download link lifetime to your email order. Or you can update your courses at “My Downloads“ 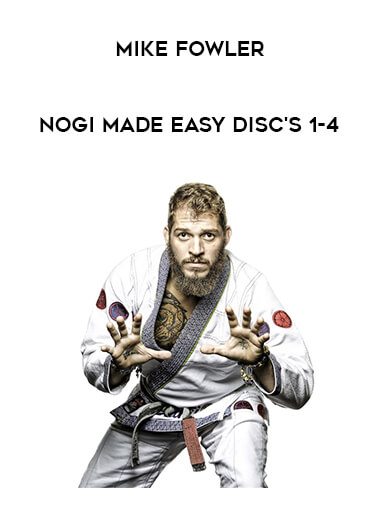 Avoiding the guillotine during takedowns

Escape from the figure 4 back-control

Escape from knee on belly

2 head-lock escapes: both from kesa gatame (judo side control)

Escape from the lockdown: this counter is an escape and a submission this was

almost worth the money to me just for this technique.

2 Good Take-downs for competition, from the clinch, No-Gi Harai-Goshi and a

Technical details of the omoplata

Escape from the reverse triangle

Catching submissions: in the transition or from a strong position

General strategies when working from the guard

Half-guard, underhooks and the Brabo chokes

How to maintain the mount

Mike’s half-guard game from bottom: he starts from the worst case scenario, opp

has underhook, strong cross face and your flattened out.

Escapes from back when choke is in.

Submissions from inside closed guard

Escape omoplata and counter to submission

..more details on the knee cut pass, a sweep, body mechanics, the nuts and bolts

Fail safe guard pass?:Mike explains how no move is 100% and shows pass from