STREET FIGHTING APPLICATIONS OF WING CHUN DVD 1: CHOY LI FUT BY WILLIAM CHEUNG is digital courses, ebook, digital audio and DVD… not physical product. We will sent a download link lifetime to your email order. Or you can update your courses at “My Downloads“ 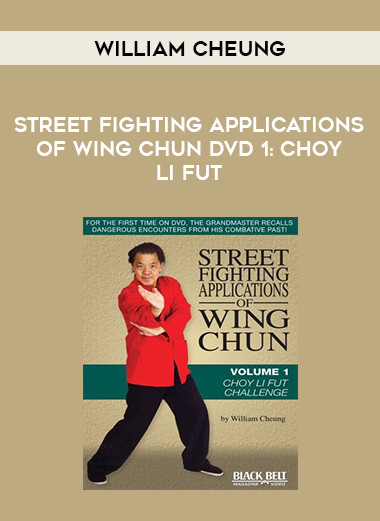 In Street Fighting Applications of Wing Chun, Volume 1: Choy Li Fut Challenge, grandmaster William Cheung deconstructs the wing chun techniques used to survive some of his most dangerous street fights in this DVD. The topics covered include:

Grandmaster William Cheung is a Black Belt Hall of Fame member and has trained since the age of 10 with the legendary Yip Man. From his headquarters in Australia, grandmaster William Cheung now operates a worldwide network of instructors and students interested in learning wing chun techniques. He is also an expert in meridians, pressure points and meditation dealing with internal energies. Today, his programs for sports injuries and stress-related illnesses are highly sought across the globe.