Narcissistic Abuse for Therapists: Empower Clients to Break Free and Recover from Gaslighting, Emotional Manipulation and Coercion $27.00
Back to products
Next product

STREET FIGHTING APPLICATIONS OF WING CHUN DVD 3: MUAY THAI MELEE BY WILLIAM CHEUNG is digital courses, ebook, digital audio and DVD… not physical product. We will sent a download link lifetime to your email order. Or you can update your courses at “My Downloads“ 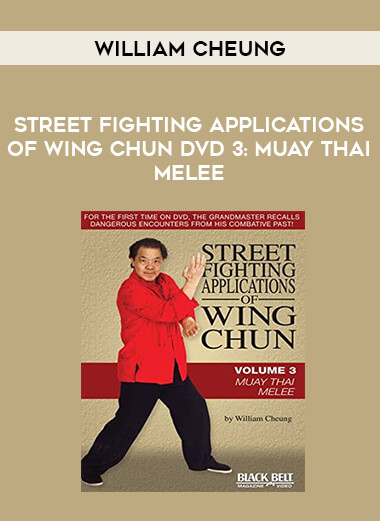 Grandmaster William Cheung, the longtime friend and wing chun training partner of Bruce Lee, recalls some of his most dangerous street fights and deconstructs the techniques he used to survive the encounters.

In Street Fighting Applications of Wing Chun, Volume 3: Muay Thai Melee, Cheung shares the story of how in the spring of 1962 in Sydney, Australia, he received a call for help from a friend being bullied by a fighter from Thailand. The ensuing confrontation with the Thai fighter and his cronies puts Cheung in a situation where he’s outnumbered and faced with three opponents all armed with brass knuckles. As the fight goes on, Cheung is injured but still manages to devise some creative solutions to stay alive. Learn how he did it!

Topics include dealing with multiple opponents, defenses against low kicks, dealing with elbow and knee strikes, execution of stances and entry techniques, shin-kick drills and cross-arm drills for close-quarters fighting.

Cheung is a member of the Black Belt Hall of Fame (Kung Fu Artist of the Year, 1983). He has trained since the age of 10, originally under the legendary Yip Man. From his headquarters in Australia, Cheung now operates a worldwide network of instructors and students in the fascinating art of wing chun. He has also become an expert in meridians, pressure points and meditation dealing with internal energies. Today, his programs for the treatment of sports injuries and stress-related illnesses are highly sought across the globe.